Last week was one of the most impactful weeks I have had in some time.  I was part of a team that traveled to Brasilia, the capital city of Brazil, for a week of ministry.  Our team left on Saturday, May 25th with ten folks from Lakeside, five from Valleydale Baptist and four from McElwain Baptist. Here is a photo of the team….

The focus of this ministry effort was constructing of a church building. Brasilia was started literally from scratch in 1960 when a new capital was established there. The city grew up around the capital and is now a city of 4 million people. In response to such rapid growth, the Brazilian Baptist Convention has been actively helping to start churches in new areas of development and in areas that lacked an evangelical church. The idea is to gather a group of believers in an area, begin meeting together and eventually form a congregation.  After that, buildings and/or land is purchased so that a visible, permanent home for the congregation can be constructed. Beginning with a partnership with the Birmingham Baptist Association in 1989, over 150 churches have been started in Brasilia with the overwhelming majority of them having a building constructed by Birmingham Baptist churches. This is where Lakeside comes in. Since the first trip involving Lakeside members in 1991, Lakeside has helped to construct 29 churches in Brasilia. Here was our focus for the week….

As you can see, the foundation and roof structure was already in place. We just needed to build the walls. After scrapping up the money to purchase the property, the churches biggest obstacle is always construction costs. Lakeside and McElwain completely covered the cost for this phase of construction. The church had been meeting in the small, cramped building just behind this one. It is located in a poor area, plagued by high crime and many broken families.  Several bars in the neighborhood around the church stay busy.  The church wanted a visible witness for Christ on this street.  It was a joy to watch the project come together. 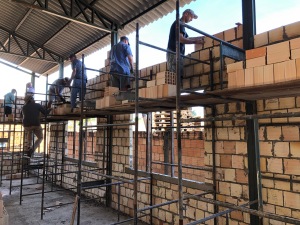 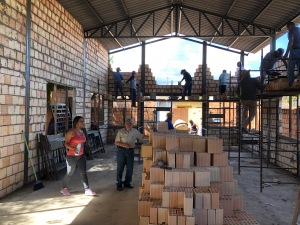 The week culminated on Friday evening with a dedication service in the building we just built. It got started at 8:00 p.m. – that’s the Brazilian culture!  The church was packed and dozens of people stood outside looking into the doors and windows. Pastor Jose baptized two precious adults and Fatima Garcia, our Brazilian contact and coordinator, provided excellent interpretation from Portuguese to English, and vice versa!

The Brazilians presented plaques from the Presidential Palace recognizing and thanking Lakeside members Jerry Cross and Lamar Miller for their incredible work in Brazil. Together these two men have been part of building 29 churches in Brazil. It was a true honor for me to go on this trip with them and see the literal work of their hands. Jerry is a Korean veteran and Lamar is actually a WWII vet. Their generation doesn’t stop easily! 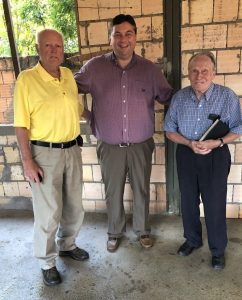 I had the privilege of preaching, and we saw 17 precious souls give their lives to Christ.  The Holy Spirit was moving with power and many tears of joy were shed. It was one of the most powerful services I have been part of years. Praise God!  It was a privilege to be a small part of it.  When we go back next year, on Sunday evening we will begin our trip with a service in this building and see the progress this little church has made. Then we will build another building and have the dedication service in it on Friday evening.  Let me share some of my thoughts after this week in Brazil.

1.  The American church is too often comfortable and prayerless. It’s so easy for those of us in American churches to focus on “what we want” and “how we think church should be” when we need to focus on the mission. As a result, too many churches are filled with people who are focused on themselves. To see what the Brazilians have accomplished with meager resources is convicting. Could it be because they tap into another resource?  When the Brazilian Baptists see a need for a church, they begin to PRAY and ask God to provide. 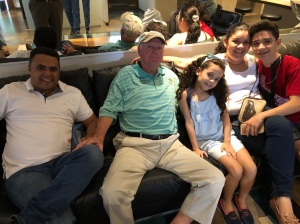 The picture on the left is Jerry Cross with a Brazilian family in the hotel lobby.  The husband and wife were children in 1991 when Jerry Cross and Lakeside made their first trip to Brasilia. Several children came to Christ during that trip – this couple was among them. Now, they are parents, raising their children to live for Christ.   The opportunity to build relationships with the Brazilians over years is enriching and encouraging.  The picture on the right is my son talking with Lamar Miller before the Friday evening service. Even though we have been part of the same church for over five years, Daniel had never really talked with him. Now they are buddies!  Inter generational relationships happen naturally on mission trips.  Sometimes, friends for life are made on these trips.  McElwain member Joe Meads served as the trip leader and did a phenomenal job. Both Joe and I feel that have each made a new significant friend through this trip.

3.  Sometimes once in a lifetime moments come along. 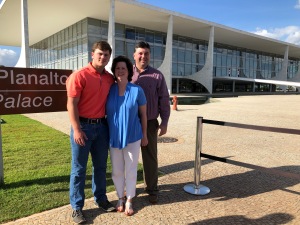 Fatima Garcia arranged for us to tour “The Palace” in Brasilia, the executive offices of the President of Brazil. Later in the day, we visited his official residence several miles away and Fatima received word that the President would be arriving soon. Long story short, they got word to President Jair Bolsonaro that a group of Americans doing Christian work in Brazil was at the gate and wanted to meet him. He stopped and greeted the group. Yes, we met the President of the fifth largest country in the world!

5.  It’s better to go on mission with family.  Becky and Daniel went with me on this mission trip. We experienced the week together.  One couple brought their eleven year old daughter and a man brought his eleven year old son on this trip. Talk about making memories!  It most definitely was NOT a vacation, but it was better than a vacation in so many ways!  Don’t believe me?  Try it.

One thought on “Incredible Week in Brazil”