Yes, we had the privilege of visiting Arlington National Cemetery on Memorial Day. If you have never been there, pictures and words cannot describe it. If you have been there, you know what I am talking about!  All of the ceremonies had taken place earlier in the day, and we arrived in the late afternoon and enjoyed a couple of wonderful hours there with light crowds.

Later on our trip to Washington D.C. we visited the Vietnam Memorial.  I had always wanted to see it particularly because I have a family member whose name is one of 50,000+ inscribed on that wall.  My mom’s brother, Royce Hall, was drafted during the Vietnam War and died there.  My mom was pregnant with me when that happened, so I never had the privilege of meeting my uncle Royce. It was a great privilege to take my boys there, find his name, and spend a few minutes remembering him.  Below is a photo of Daniel tracing his name on the wall. 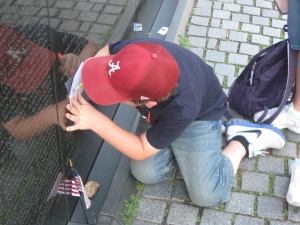 On this day, Americans often say that “our freedom isn’t free” but three years ago today my family was reminded of that in a very tangible way. On this (and every) Memorial Day, we remember and we say, “Thank you” and “May God bless America.”